Qatar Aluminum Manufacturing Company (QAMCO) is a Qatari Public Shareholding Company incorporated on December 3, 2018 under commercial registration number 126659. The principal activity of the Company is to operate as a holding company. Headquartered in Doha, Qatar, QAMCO was founded by QatarEnergy, as the sole founder, under Article 68 of the Commercial Companies Law, to own its 50% stake in Qatalum, a highly profitable producer of aluminium. The Authorized share capital is QAR 5,580,120,000 divided into 558,011,999 ordinary Shares and one (1) Special Share. 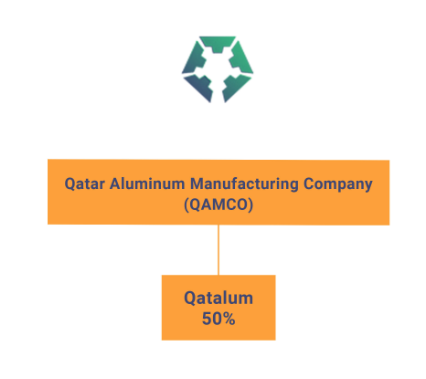 QatarEnergy provides all of the head office functions for QAMCO through a comprehensive services agreement. The operations of the subsidiary remain independently managed by its respective Board of Directors and senior management team.

Details of major shareholdings are as follows:

The Company is founded by QatarEnergy as sole founder under Article 68 of the Commercial Companies Law. H.E. the Minister of Economy and Commerce has issued the decision of the establishment of the Company on 15 October 2018.

QatarEnergy has transferred its entire equity interest in Qatar Aluminium Limited Q.S.C., an equal joint venture between QatarEnergy and Hydro Aluminium of Norway, to QAMCO.